ESPN India
Share on FacebookShare Share on TwitterTweet
Get a report of the Stade Rennes vs. Paris Saint-Germain 2020-21 Ligue 1 football match. 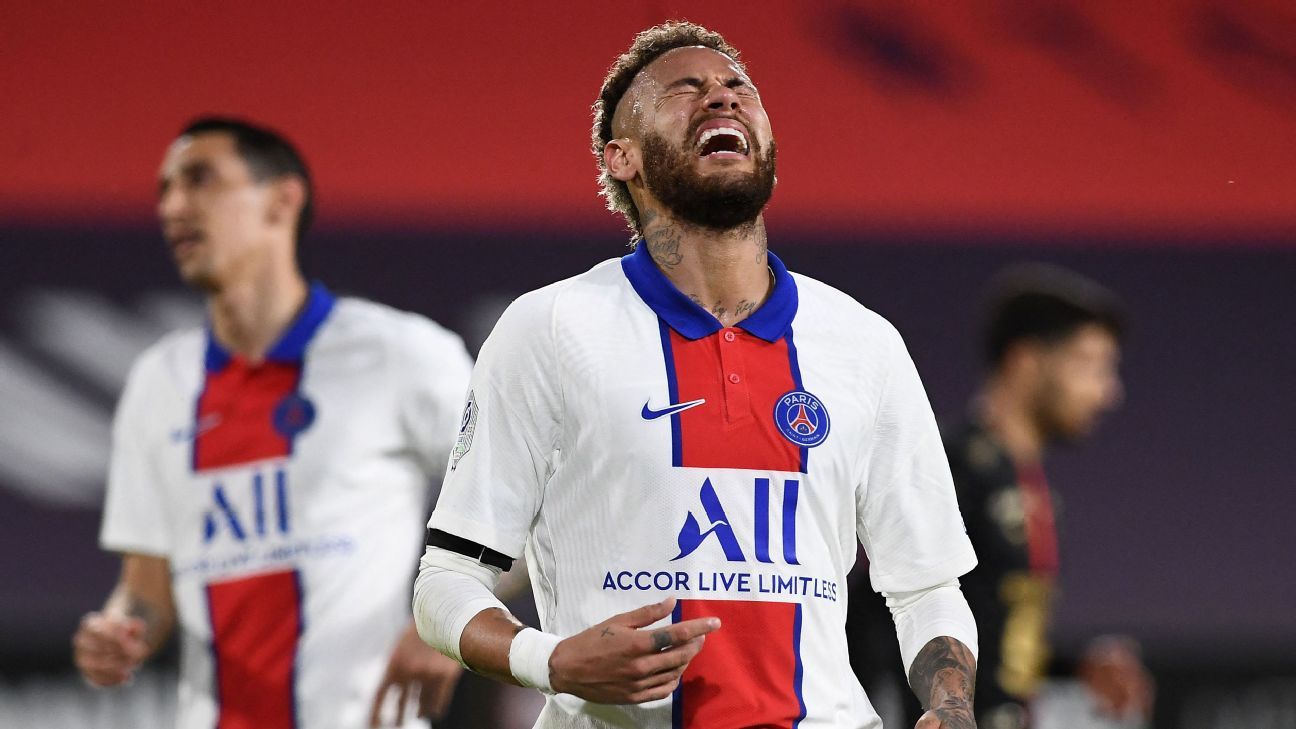 Paris Saint-Germain's Ligue 1 title hopes took a major knock on Sunday when the defending champions were held to a 1-1 draw at Stade Rennes, leaving Lille holding a three-point advantage at the top with two games remaining.

Neymar opened the scoring with a penalty on the stroke of halftime but Serhou Guirassy equalised in the 70th minute to leave PSG, who finished with 10 men after Presnel Kimpembe was sent off in the 87th minute, on 76 points.

Lille, on 79 after thrashing neighbours Lens 3-0 away on Friday, need four points from their last two matches against mid-table Saint-Etienne and Angers to guarantee their first Ligue 1 title since 2011.

AS Monaco are third on 74 points after beating Stade de Reims 1-0 away earlier on Sunday, one point ahead of fourth-placed Lyon, who beat Lorient 4-1 on Saturday.

PSG, who were knocked out in the Champions League semifinals by Manchester City on Tuesday, could face the prospect of finishing the season without a major trophy.

Mauricio Pochettino's side travel to Montpellier in the French Cup semifinals on Wednesday.

There was a minute's silence in memory of former PSG and Rennes goalkeeper Christophe Revault, who died earlier this week at the age of 49.

PSG threatened early on through Ander Herrera and Neymar, but Rennes were quick on the break, with Jeremy Doku proving a nightmare to handle for Layvin Kurzawa on the right flank.

The visitors were awarded a penalty by referee Ruddy Buquet after a VAR review although it appeared Nayef Aguerd's contact with Kurzawa happened after the PSG fullback had fired over.

Neymar converted the spot kick six minutes into added time in the first half.

Doku, 18, continued to torment PSG's defence after the break but the Rennes goal came from a set piece as Guirassy headed the ball into the top corner from Benjamin Bourigeaud's corner.

Once again, PSG lost their cool and centre back Kimpembe was shown a straight red card for a brutal challenge on Doku, leaving their defence exposed for the final minutes.

It took a superb save by Keylor Navas to deny Flavien Tait in added time to salvage a point for PSG, who are chasing a fourth successive Ligue 1 title.