A ferocious display from the Marco Rose's team saw four first-half goals ripple the Schalke net. The hosts managed to reduce the arrears in the second half, but it would end up as little more than a consolation goal. Leipzig running out convincing 4-1 winners. 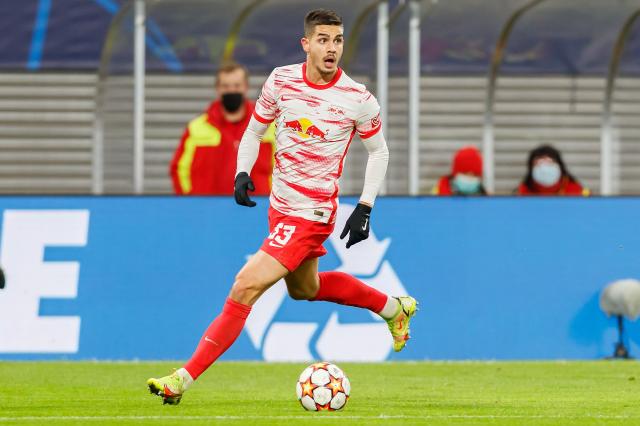 André Silva.Photo: Steffen Prößdorf, CC BY-SA 4.0
After returning to action for the first time since the World Cup last weekend, the Bundesliga made a swift return in the form of midweek matches for Matchday 17. Schalke and Leipzig fronted up in Gelsenkirchen to commence proceedings this evening. The latter came into the game on a high having taken a point from Bayern all the while reducing the ‘Rekordmeister’ to 7 shots. Schalke on the other hand were hoping to avenge their defeat to Frankfurt on the opening day of the Rückrunde.
RB coach Marco Rose was left beaming inside the opening minutes when his side hit the front. Timo Werner latched onto the ball over the top which bisected Yoshida and Matriciani. Werner unselfishly left the rest to strike partner André Silva, who picked his spot and found the bottom right corner in the 7th minute. Szoboszlai stung the palms of Schwolow three minutes later who managed to deal with the dipping strike accordingly. However, it wasn’t long before Leipzig doubled their lead on 15 minutes. Szoboszlai fed Olmo in the centre of Schalke half who in turn slipped in the marauding Benjamin Heinrichs. The full-back, replacing Lukas Klostermann tonight, fired low and hard beneath Uronen and Schwolow for 2-0.

Olmo looked to have scored his side’s third on 22 minutes when he turned Orban’s headed effort into the net. The Spaniard’s celebrations were cut short when he spotted the offside flag was aloft. Schalke were really struggling to stay in the fight as the game ticked beyond the half hour mark. Leipzig’s intense press fenced the hosts in which reduced them to zero shots on goal. The tie was firmly put to bed before the break when Leipzig scored two in quick succession - Olmo pivotal on both occasions. Silva bagged his second of the evening picking off the scraps left over from the Spaniard’s saved effort, while Werner tapped home for 4-0 from as many yards. A humbling half of action for ‘Der Koenigsblauen’.

Thomas Reis’ charges made a slightly brighter start to the second half. A double substitution of Mehmet-Can Aydin and Andreas Ivan allowed Soichiro Kozuki to release a rather optimistic shot. Orban and Heinrichs responded at the other end with dangerous efforts of their own. Schalke did manage to reduce the deficit on 56 minutes – A delightful first touch set Kozuki free from Gvardiol and Halstenberg to slot the ball past the onrushing Blaswich. Silva had a chance to bag his hattrick just after the hour mark but for Schwolow’s intervention. The rebound fell kindly for Laimer who was kept at bay by Matriciani.

The game entered a bit of a lull as the clock ticked towards full time. Haidara and Poulsen replaced Laimer and Werner for the Saxon side, while Mohr and Terodde entered for the hosts. Olmo capped off a terrific individual display on 83 minutes with the goal of the night – a perfectly weighted chip from the right-hand side of Schalke’s 18-yard box sailed over Schwolow and into the net. An incredible three assists and one goal from the in-form RB midfielder. Five quickly became six for Leipzig in the 89th minute. Substitutes Kampl and Poulsen combined as the Dane curled home from an acute angle. All in all a miserable night for Reis’ Schalke as the Veltins Arena seats lay bare as the final whistle arrived.