After weeks of anticipation, it finally became official on Saturday; Neymar will remain a Paris Saint-Germain player until 2025.

There was little doubt that the Brazil international would sign a new deal with PSG, yet after a meek Champions League exit to Manchester City, there was, nevertheless, an element of concern creeping in that talks had dragged on so long.

Neymar, too, had gone rather quiet. Previously, he had spoken effusively of his new-found contentment in Paris only for a couple of weeks of silence to leave fans nervy.

They need not have worried, though. On Saturday came the announcement that PSG supporters were waiting for, with Neymar signing a new deal.

It may not have been the five-year extension that was expected, but it was nevertheless a clear indication of the 29-year-old’s commitment to the club amid reports from Spain that Barcelona were ready to somehow launch a finance-defying move for the superstar.

“I’m very happy, very happy to be extending my contract with Paris until 2025,” he told PSGTV.

“The truth is that I’m very happy to be staying here for four more years, to be a part of the club’s project, to try and win titles, to try and achieve our biggest dream which is the Champions League.

“The first factor is happiness. The joy of being part of this squad, of the team, of Paris Saint-Germain, the club. And then, of course, the affinity I have with the club, with the work, with the players that are in the squad today, with a great coach who will certainly help us even more.” 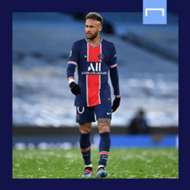 What was perhaps most surprising about Neymar’s comments, though, was the frank admission of the problems that nearly saw him jetting back to Camp Nou in the summer of 2019.

“Things have happened that should not have happened,” he admitted. “We had fights, a few sad times, but overall, the evolution has been very positive.”

These issues, clearly, have been overcome, and Neymar is ready to spend what should be his peak years at PSG chasing not only team glory but the elusive individual prizes that he craves.

Injury issues have hampered his chase for the Ballon d’Or. Over his four years with PSG, he has missed close to 100 matches through injury and suspension.

Two fractured metatarsals denied his employers his talents at vital times in the 2017-18 and 2018-19 seasons, during which they went careening out of the Champions League.

This time around, meanwhile, he had to battle back from a groin problem to face Bayern Munich and then Manchester City.

After the elimination against City, though, he faced pointed criticism that highlighted his far from universally popularity in France.

His performance was branded “catastrophic” in France Football and “astonishingly wasteful” by L’Equipe, while former Champions League finalist Jerome Rothen said: “If PSG want to go forward with Neymar, his behaviour must improve.” 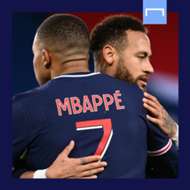 Such experiences are the price he pays for being the team’s highest-profile figure. And they are also relatively rare. A return of 89 goals and 49 assists from 115 games, placing him in the club’s top 10 scorers of all time, is a fine effort in a relatively brief period.

What Neymar offers PSG, though, is more than his on-field contribution. His influence among young fans provides exactly the type of credibility that owners QSI, whose goal in owning the club is to gain soft power, relish.

With 150 million Instagram followers, Neymar cuts a marketable figure that is matched only by Barcelona’s Lionel Messi and Juventus’ Cristiano Ronaldo.

Furthermore, his influence on the PSG ‘brand’ is enormous. Within 24 hours of signing in 2017, it is reported by Le Parisien that the club had shifted 12,000 Neymar jerseys, generated more than €1 million in turnover and caused the club website to receive a seven-fold increase in traffic overnight.

Now PSG hope that some of that Neymar magic might rub off on club-mate Kylian Mbappe, who is also stalling over contract talks amid reported interest from Real Madrid.

The World Cup winner has been waiting to see what sporting projects can be proposed to him in the summer, and the long-term commitment of Neymar can only strengthen PSG’s cause.

Madrid, meanwhile, have an ageing squad as well as some uncertainty over the future of head coach Zinedine Zidane, who is surely a pull factor for the Bondy native.

Although it seems inevitable that Mbappe will follow in the footsteps of idol Cristiano Ronaldo by moving to the Bernabeu someday, this does not appear the optimal time to be making that leap.

PSG, after all, have flexed their financial muscles to keep Neymar at the club and clearly have no intention of giving up on their Champions League dream. With the Brazilian in their ranks for the next four years, they will always be considered a danger.