Hot topics close
Home Marine vs Tottenham Marine vs. Tottenham Hotspur was a celebration of what makes football great

Marine vs. Tottenham Hotspur was a celebration of what makes football great

Cartilage Free Captain
Share on FacebookShare Share on TwitterTweet
Goliath clobbered David, and yet everyone came away happy. 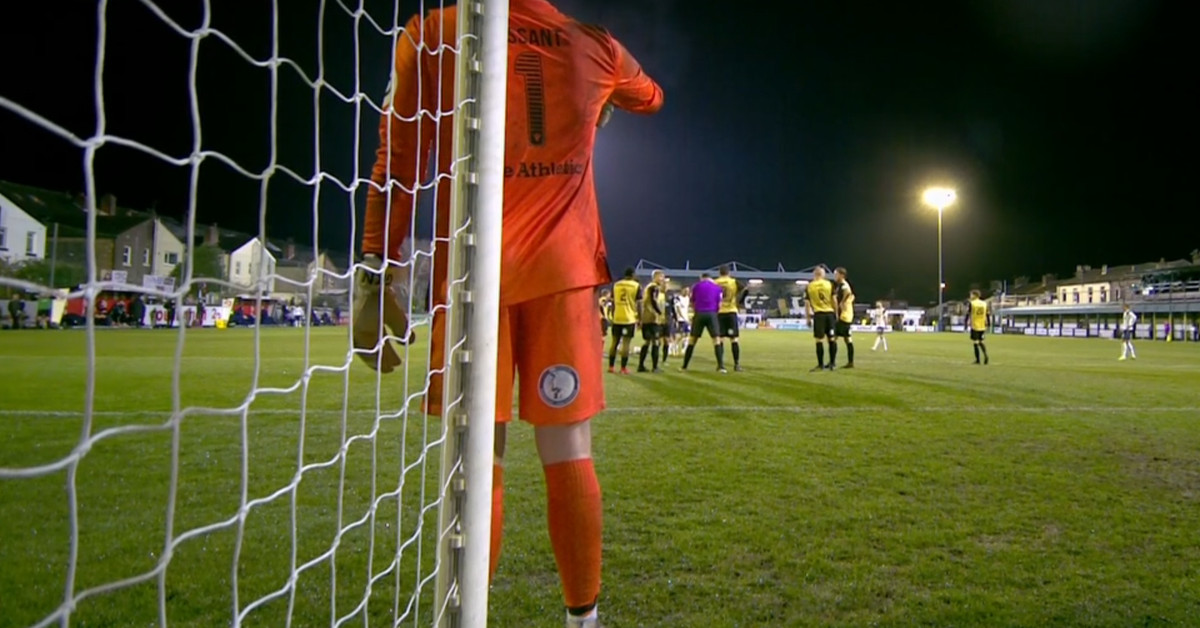 Watching Tottenham Hotspur walk out onto the pitch at Rossett Park was one of the more surreal experiences I’ve had in my 14 years as a Spurs fan. There was the mighty Tottenham, fourth in the Premier League, massive London club, walking onto the pitch of a tiny municipal ground just north of Liverpool after changing clothes in a makeship pub. Spurs were set to play at Marine AFC, a club that plies their trade in the 8th tier of English football, in one of those improbable FA Cup draws that fans of the Cup wistfully talk about but few rarely actually see.

In fact, this was the biggest mismatch in the 149 year history of the FA Cup. Never have two clubs so far apart in the table faced each other, much less at the minnow’s home ground. Rossett Park was lined with fencing to better catch stray balls that could easily end up in the gardens of the row houses that lined both sides of the pitch. It’s the kind of quintessentially English ground that just seems to appear in the middle of a residential neighborhood without looking out of place.

In fact, the only thing that did look out of place... was Tottenham Hotspur. Watching video of Gareth Bale walking around pre-match doing a pitch inspection was incredible. Who ever would have expected an international superstar in Crosby? “From Madrid to Marine,” gushed the ESPN+ announcers after Bale made a second half appearance off the bench. But that’s the FA Cup for you. It’s magic, you know.

The ground was closed to spectators due to COVID-19 but that didn’t stop the faithful from finding the best vantage points outside the fences in order to watch their local play their biggest match in club history. One woman drank white wine while two small girls nearby blew air horns with glee during Spurs’ free kicks and set pieces. A man watched the match from behind a shrubbery alongside a life-sized cutout of Jurgen Klopp. You could see faces on TV peering out the windows of the residential homes.

The atmosphere was one of unbridled enthusiasm and infectious hope. Marine weren’t going to beat Tottenham Hotspur. Everyone knew it. It hardly mattered. Those who were lucky enough to catch a glimpse of the match were there to be a part of history.

The grin didn’t leave my face for the entire match.

The FA Cup is one of the most egalitarian competitions in world football. The concept is simple: take all the clubs in England, from pub team all the way to the top, throw them in a hopper, and pick them out at random in one giant knock-out tournament. The mechanics are slightly different, but that’s more or less the gist. Matchday revenues are split. And while a team from outside the top flight hasn’t won it all since West Ham in 1980, it’s always been a celebration of the lower divisions. Small clubs who draw a big one in the early rounds can earn upwards of their entire yearly revenue with just one match. Sometimes, they even win.

That this year’s FA Cup is proceeding amidst the backdrop of a global pandemic that is currently raging unchecked throughout the UK (and the world) made Sunday’s match in Crosby all the more special. With football clubs at the top levels of the sport postponing matches due to positive test results, it’s a minor miracle that the match took place at all. For a club like Marine that, like so many other non-league clubs, relies on matchday revenue to survive, hooking a white whale like Spurs and then not being able to even allow spectators must have felt cruel.

Without tooting this blog’s horn too much, it was this that prompted us to start the fundraiser for a sponsorship that ended up raising $12,000 for Marine and resulted in the Cartilage Free Captain logo in the backs of Marine’s shorts. It was that same feeling that led 30,000 Tottenham fans to purchase “virtual tickets” at £10 each for a match they couldn’t even attend. Spurs fans opened their pocketbooks to support a club that most of them had never even heard of, because they love the FA Cup and what it stands for, they love the story of Marine’s magical run, and because they love supporting grassroots football at a time when its survival has never before been so threatened.

Football can be a maddening sport. The proliferation of money throughout the top levels of the game and its massive popularity across the globe have over time turned it from a working class diversion to one that has nearly priced out all but the wealthiest fans from attending matches. It has become so corporate and finance-focused that many complain that it has lost touch with the very fans that helped it rise to prominence. Never mind that new “improvements” like VAR and... whatever the handball rule is now have at times seemed to suck the fun right out of everything. For a few months last spring, the coronavirus prevented the world from even the most banal diversion of what the sport can bring.

Sunday’s match was different. It was a reminder of the good that football can do — that fans can come together across seven divisions to enjoy the mutual appreciation of the sport. It reminded me of why I started watching football in the first place. There was joy in that mostly empty Rossett Park, and it had little to do with what was happening on the pitch. I can say with some certainty that even if Marine had pulled off the unthinkable and defeated Spurs, I would’ve been as delighted to be part of that story as disappointed to crash out of the competition.

It didn’t happen. Marine defended stoutly at the opening of the match and hung on for a good 20 minutes. They almost took the lead when Neil Kengni clanged a dipping shot off of the crossbar, nearly past an astonished Joe Hart. That was the high point of the match for the home side. Spurs went on to win 5-0 behind a hat trick from Carlos Vinicius, a free kick strike from Lucas Moura, and a on-his-club-debut goal from 16-year old midfielder Alfie Devine.

The match was never really in doubt. That’s not the point. This was a celebration of everything that makes the FA Cup — and football in general — so great. It didn’t matter that Spurs’ B-team clobbered Marine. The fact that this ridiculous match even happened, between a Premier League giant and a tiny neighborhood club made up of garbage collectors, teachers, plumbers, and grocers who play footy on the side, transcended anything that could have happened on the pitch.

When official Michael Oliver blew the final whistle, Marine’s players looked exhausted, but not at all dejected. They played well despite the big loss, earned themselves some respect in the eyes of Tottenham’s players, and could leave the pitch with their heads held high. Tottenham left a bag of kits for the players — shirt exchanges were prohibited due to COVID-19 regulations — and a promise to send the match-worn shirts to Crosby after they’d been laundered.

Marine’s players will one day tell their grandchildren about how they lined up at tiny Rossett Park against the mighty Tottenham Hotspur and played against Gareth Bale, Moussa Sissoko, and Lucas Moura. 20 year old Marine keeper Bayleigh Passant may have shipped five goals, but he kept out one heck of a free kick from Bale. One suspects Marine’s squad will rarely have to pay for a drink at the pub for a while. In contrast, Tottenham’s players got to get out of London for a bit, visit a ground they’d probably never in a million years come to, and experience the excellent Marine AFC hospitality.

“I have so much respect for José Mourinho and Tottenham Hotspur as a football club from this,” said Marine manager Neil Young after the match. “He has done what he said he would do with his team selection, he brought on players he could have easily left on the bench and Tottenham as a club have supported us wholeheartedly. Over 30,000 virtual tickets have now been sold for this match which is just phenomenal.

“I want to give a big shout out to the whole football community for that. The Tottenham fans have got right behind that so a big thank you to everyone from Marine Football Club. This will set us up for a long time. I have so much admiration for Tottenham Hotspur Football Club after today.”

Jose Mourinho also understood what this match meant. “Since 2004, I have been in England and I’ve never played against a side at this level in the pyramid,” he said. “I’m not English, but I know what this means for everyone so I brought a good team, not just for the result, but also for the meaning of the cup.”

The final score was a 5-0 win for Spurs, but it was a match that meant so much more. Tottenham may be going on to the FA Cup fourth round, but it was all of football that won on Sunday.