Sky Sports
Share on FacebookShare Share on TwitterTweet
Timothy Fosu-Mensah has completed his move from Manchester United to Bayer Leverkusen for £1.8m. 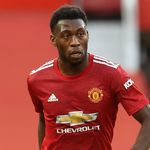 Timothy Fosu-Mensah has completed his move from Manchester United to Bayer Leverkusen for £1.8m.

Ajax, Marseille and Hertha Berlin had also been interested after he rejected a new contract at United but Leverkusen - who sit third in the Bundesliga table - have won the race.

Fosu-Mensah had only played 30 times for United since making his debut as a substitute in the 3-2 win over Arsenal in February 2016.

What turned out to be his final appearance for the club came as a substitute in the Champions League group game against RB Leipzig in Germany on December 8.

Fosu-Mensah may not be the final player to leave Old Trafford in the January transfer window, with Jesse Lingard's representatives holding talks with Ligue 1 side Nice over a potential loan move.

The 27-year-old started United's FA Cup win over Watford on Saturday but hasn't been named in a Premier League start XI for more than a year.

Last month, it was reported that La Liga club Real Sociedad had held initial talks over a possible loan deal for the midfielder.

Lingard's representatives also held talks with several clubs in England and Europe in the summer, but a move did not materialise.

Pitch to Post Preview: Are Man Utd title contenders? Plus: The secret to Arsenal's turnaround, and the impact of coronavirus at Aston Villa

This week on the Pitch to Post Preview Podcast we look ahead to the midweek Premier League games. Peter Smith is joined by Sky Sports News reporter James Cooper to discuss Man Utd's title credentials, with Ole Gunnar Solskjaer's side aiming to go clear at the top on Tuesday.

Plus, Sky Sports News reporter Rob Dorsett has the latest on the impact coronavirus is having at Aston Villa, following the postponement of their game with Tottenham, tells the story of Louie Barry, and discusses Wolves vs Everton.

Listen to the Sky Sports Pitch to Post Podcast on: Spotify | Apple | Castbox

The winter transfer window is open until Monday February 1 at 11pm.

Follow all the news and analysis on Sky Sports News and across Sky Sports' digital platforms, including our dedicated Transfer Centre blog.